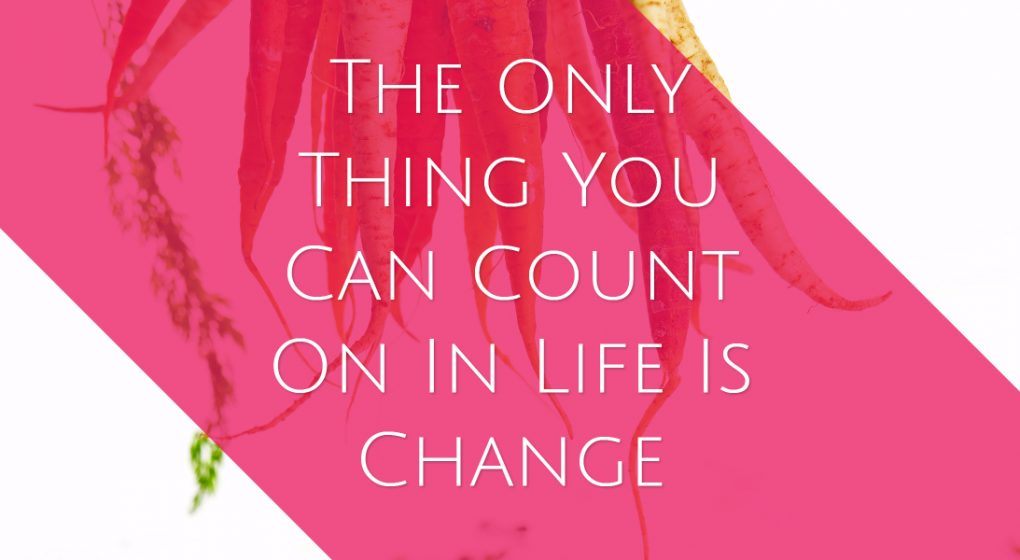 Nothing gets people at my house more fired up than me changing brands of some food they love. You know the scenario….they go to grab the peanut butter (if you have that in your house) and you hear, “Mom, what IS this?” Well, obviously it’s peanut butter but that’s not what they are really asking. They are miffed that you switched brands. It CANNOT taste as magical as their favorite. They know this before even trying it. Well, it’s a fair assessment that over the last 8 weeks this has been an ongoing dialogue here at the Elmore’s. Some of the household members are more open to that horrible thing, change, than others.

I recently had a conversation with my boys and told them that there are really only 2 things you can 100% count on in life. First, is the unconditional love from your parents. The other is change. Everything changes. Your body changes. The seasons change. Friends change. Change for the good and for the bad. But either way you can count on it. And so with that nugget of wisdom I explained that they just need to get over it and roll with the one constant they’ve got. Neither seems too impressed.

Regardless of how right I am in this case, I know that making small changes little by little and being patient while firm with the boys and with myself is the best course of action and definitely doable for the average person in the long run. Completely wiping out a pantry of anything remotely unhealthy is not only overwhelming, it’s really not cost-effective for most people. So what small changes have we made in these 8 weeks?

1. Drinking more water. Logan loves lemonade and orange juice which are both high in sugar. Logan has had to give up dairy in the past due to his lyme disease and never really liked it anyway. Water is not his first choice at any rate. Nolan is a milk lover. He has asthma and allergies and this is not a wise choice for a drink for various reasons but the mucus it induces is one of them. He also goes for the lemonade and Gatorade when available. Both boys are heavily active in sports and need to re-hydrate constantly. The new rule is to drink water first, then they may have a drink if they still are thirsty. This has increased their water intake a lot. Plus they are both getting more used to it. I wouldn’t say Logan craves water at all, but Nolan does. Adding in water to my daily life was no big deal for me. I drank soda a little bit. That has ended. I had some of one recently and thought it really was gross and made me feel sick. Same rule for me and I’ve replaced coffee with green tea. We’ve all found here that a lot of times when we “crave” a snack or something to eat we really are thirsty and the water takes care of it. The whole idea is to start creating good habits of drinking water which is really the only drink anyone really needs. Not everyone here is on board with that way of thinking yet, but they are getting closer and to me that is great progress.

2. Adding in more veggies. This seems simple but if you’ve got picky eaters or a husband who swears anything green other than iceberg lettuce and guacamole is illegal, then you feel my pain. Also, as I was taking my classes I realized that half of the foods they were talking about I had no idea what the heck they were. Bok choy sounded like a karate move but apparently it’s edible. And with a fear of cooking and totally sucking, the idea of deliciously cooking up vegetables for the eaters that gag just looking at it is intimidating. So what I learned is to have a game plan. This is what I do with exercise, so why can’t I do it with veggies? Pick a new vegetable every other day that you will try and add to the side of some food the family likes. I’m lucky that IIN has amazing recipes and great cooks on Facebook that share and help each other. So like a new exercise that I throw into the rotation, I also admit if it’s not really effective and instead of totally giving up on the idea, I tweak it the next time and keep doing that until I’m sure it’s not working for a person. Example: roasted Brussels sprouts; while I think they are yummy, no one else here does. Yet, shredded and thrown in a salad or with other greens, they have no idea and have said nothing. Stealth mode. More on veggies coming soon….

3. Movement everyday no matter what. This one was really easy for the boys since this is just something they naturally do. I’ve always had an “all or nothing” mindset which has not always been effective. Like I said in my last post I’ve been feeling like crap for quite a while and have had numerous annoying injuries. Brett is in the same boat (reconstructed knees, back injuries, shoulder injuries…) and when we are in work-season things are just nuts with even less time to work out. So working out to me has always been intense workouts and if I can’t fit that in, then oh well. That mind-set is out-dated and ridiculous. People don’t need to do high intensity workouts every day to lose weight and keep it off. But they do need to move every day, do weight-bearing exercises a few times a week and be CONSISTENT. This is absolute key to good health. Not only does it prevent injury and disease, it’s positive for your mental health. And don’t get me wrong. If you love high intensity workouts that’s great. All I’m saying is that you don’t have to do that every single day or at all. Moving can be walking, dancing, yoga, biking, the list is endless. So the change here has been move every day no matter what. Even if that’s a 1 mile walk. Or push-ups and squats but not a walk. I mean, with the constant snow storms, I’ve just had to make due. And if you’ve got an injury then find out what you can do and do that. Modify when needed but don’t stop moving. Out of all the changes this one has been the easiest for us but I think it’s really worth mentioning.

4. Cutting out processed foods. Everyone says they are either going to do this or that they don’t eat much processed foods or give it to their kids but I think they are either lying or kidding themselves. Goldfish are processed foods, people. So are Cheerios. And it doesn’t matter that it says “Natural” or “Organic” on the package. It’s processed. Now, some processed foods are less unhealthy than others. And it’s not entirely realistic to say you will NEVER eat processed. Life gets crazy, we live in the United States (well some of us) and these inexpensive foods are everywhere and are tasty. BUT…cutting down on eating things that are processed and I’ll go into this more in a later blog with more details, this is a small change that has a huge impact. I’ve been using up what we have an replacing items with whole or raw options. For example I’ve stopped buying granola bars that are heavily processed and full of sugar. I started making protein balls and now my own “granola” options. I can control what’s in there, add in some super foods and know what we are all eating. Also, the new rule at the house is that before they grab a grain or “carb” they grab a fruit or veggie and water first. This has cut down on the crappy snacking as I call it. It creates better habits and is a small and easy change. They will complain about this at first. That was fine with me. I know I’m right and just stuck to my guns. They got over it really quickly.

So these are the first 4 changes we’ve made in January: Adding more water to crowd out other drinks, adding in more veggies to every meal while trying ones we’d never really cooked before (experimenting), movement every day no matter what (and by that I mean exercise – funny people!), cutting out processed foods as much as possible. Try it. I think it would be surprising how these small 4 changes would make a huge difference in your health and are easy to follow. They have for me. 4 pounds lost without counting calories. Inflammation and pain lessened. No more anxiety meds. I worried as I was reading this blog over that some people would say, Mandi, come on. These are common sense. Everyone already knows this. If that’s the case, then why aren’t people doing these already? I think the reason is: Change. Change is uncomfortable and scary sometimes. And it’s easier to not make any changes even though they make sense. Nothing I mentioned above is really limiting anything important. A box of Kraft macaroni and cheese isn’t really important is it? Sitting on the couch checking out Facebook rather than going out for a walk isn’t really important is it? I could go on but I think we’d all come up with the same answer. You are important. Make a change.